Searching Inward for Inspiration: An interview with OG Lullabies "The INSTRUMENT 1 is like another arm to me in the studio now."

OG Lullabies, short for Zero Gravity Lullabies, is a producer, multi-instrumentalist, songstress, and nature-enthusiast from Washington, DC. The self-described electro-soul artist combines unique electronic production with acoustic instrumentation to create an alternative fusion of sound. Artiphon's artist engagement specialist Michelle Rose connected with OG to discuss her origins, the technology that inspires her creative flow, and what’s next to come in the cosmic plane of OG Lullabies.

Artiphon: How did you start out on your musical path?

OG Lullabies: I began by teaching myself piano which sparked my love for composition. At age six I picked up violin and intensively studied classical music.

Later I discovered production and became completely absorbed. It aligned with a time in my life when I was desperately searching for new sounds that satisfied all of my musical interests and the need to hear lyrical content I could resonate with. One day I realized my mission was to stop looking for that music in preexisting records and begin crafting that vision of sound by listening within and sharing my truth.

Artiphon: What stories are you telling in your new EP DRIFT?

OG: My music is one giant mirror to my life. DRIFT is the followup to my first release, CruesControl, which reflected the divine fluidity that comes from setting immovable intentions within.

In contrast, my inner world when creating DRIFT was the opposite: plagued with sudden events unraveling with no clear reason. Once I accepted that and began to express this period of time in song, my clarity was restored. I realized the intention of the music was to acknowledge how my experience itself was the story to tell even though I wasn't planning that.

Every song reflects upon those moments where, by letting things be, the larger picture is revealed. What may have initially been perceived as buried or directionless moments in life are necessary passages to travel.

Artiphon: What sort of instruments, tools, and technologies most inspire your creativity and performances?

OG: I'm most inspired by tools that I can jump right into and have fun with. Instruments that allow me to create with ease, yet when I sit with them on a deeper level, there is room to open new realms. There are possibilities to push my limits and inspire my production methods.

Artiphon: How has the Artiphon INSTRUMENT 1 been a part of your music-making recently?

OG: The INSTRUMENT 1 is like another arm to me in the studio now. It's very impressive because before using it I never considered the relationship between the MIDI controller you use and its effect on your playing style.

For example, when using a standard MIDI keyboard I'm likely to create melodic lines that mirror the possibilities of synth or piano no matter the sound. With the INSTRUMENT 1 I can lock in the feel and record the way an instrument would realistically be performed.

Like in my song “Rites” from DRIFT; I was awake at some ungodly hour when I created that. I didn’t feel like tuning guitars and getting pedals together but wanted to record a distinct bass sound and feel. I needed to vibe with the beat. The INSTRUMENT 1 perfectly adapts, especially for multi-instrumentalists who have a tendency to “air instrument” ideas that come to us. The INSTRUMENT 1 just transforms with your hands and mind and I love it.

I also love the motion bending capabilities of the Tilt function. It broadens creative horizons from what a classical string can do, and brings to life the true cinematic drama of synth string pads. Creating, controlling, and expanding a multitude of string sounds within a composition becomes a fun and freeing process!

Artiphon: What advice would you give to artists in the process of carving out their creative workspace and finding their inner flow?

OG: My advice would be to deeply consider what it is you want to bring to the music. What do you absolutely need to express that makes your work reflective of your artistry and natural abilities? Create a space that amplifies those energies and build from there! 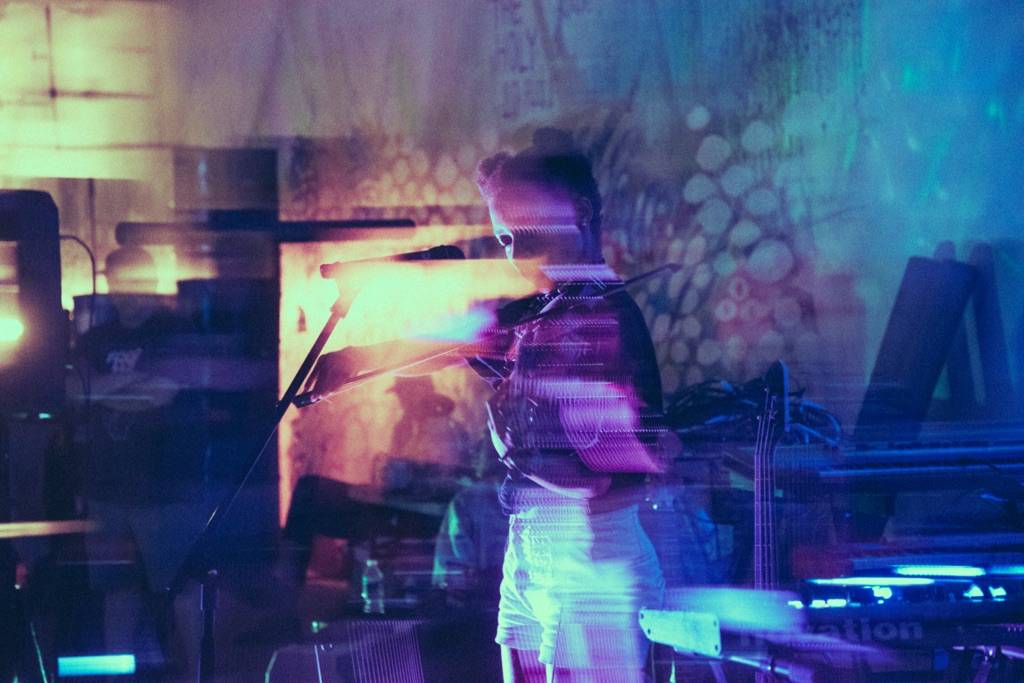 Learn more about OG Lullabies on the official site and be sure to check out the EP, DRIFT, here.